skip to main | skip to sidebar

The 'dip' in dip net 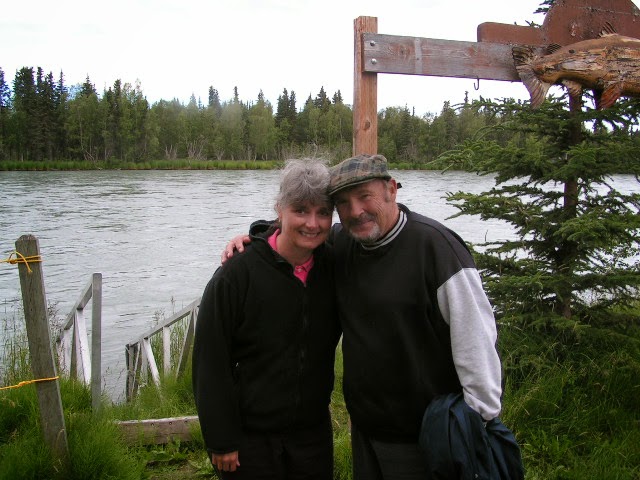 Paula Wetzsteon fished with me with her brother and grandfather in July 1986, she came back with her dad Paul July 2014. We were both kids then and a lot has changed but one thing hasn't, her and her families love for the outdoors, the Kenai River and each other. Her gramps caught a 65 pounder, a 'jumbo unit' as Paula and I called them then. Here's pic of the one Paul caught, only 60 pounds short of beating his dad....but ya know what, as different as those fish wereI think they meant the same to the Wetzsteons. Thanks for coming you guys, I was honored. 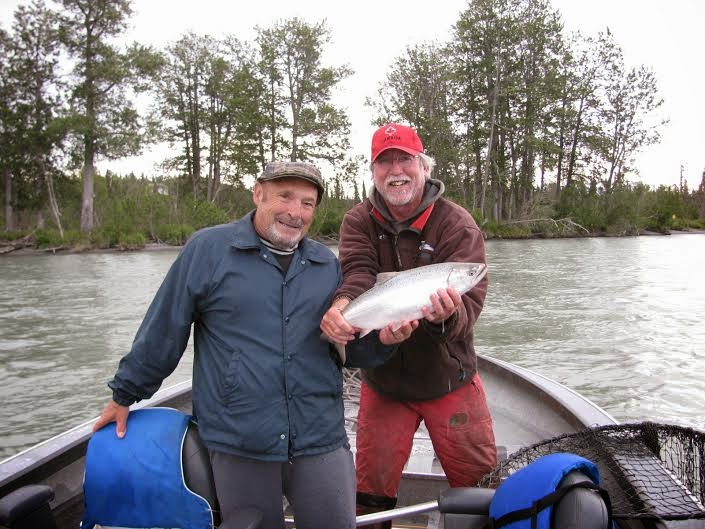 And then it started raining. And kept raining, this place just won't give us a break.  We started the season with no snow pack and the promise of a normal water level year and perhaps even a low water year. For fishing the artificials we need clean clear water and the less of it the better. Here's the graph from last Weds/Tues deluge. When ever the line jumps like that it's a sad day for a Kenai River Fisherman. I expect it to be fishy this next week, I certainly hope so.

But the good news is that the sockeye  run started early and strong. We caught a limit of these gorgeous fish like the one Lisa is holding, it took about 4 hours and we had a ball with them. On medium tackle these guys will rip you  up. So this next week the Reds should be good and we'll just keep our fingers crossed for ol slimey...And oh....before the river blew out I had a trout trip that was fantastic, so we have a river full of fish, we just need to get at them and hope the Kings come in as well. 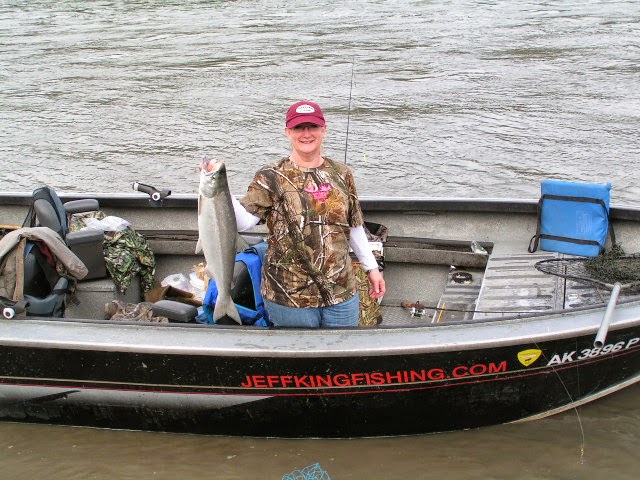 And of course with the start of the red run we have dip netters by the jillions. When you consider it's us, the commercial guys, the dip netters....man if I was a salmon I'd take the road. Here's two pics I took that kind of show the paradox of it all....people wading chest deep to catch just a few while a commercial boat goes by with a comfy crew and hold full of Reds. And the guy with just one hook, trying to trick one while the guy behind him drags a five foot dip net through the water. It's salmon fever plain and simple. It's like us sport guys are a dieing breed, when it comes to reds that is. 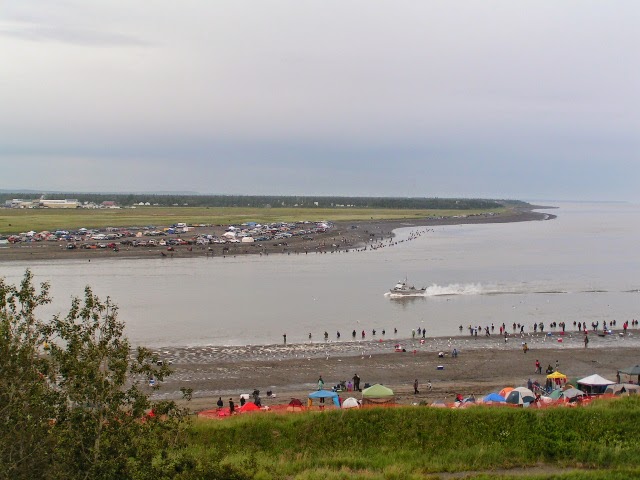 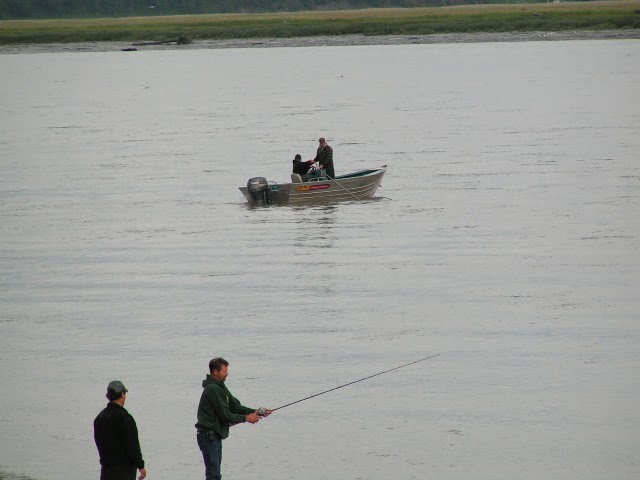 And how's about this for the American way. If you need a cheap source of protein to help you make it through the brutal Alaskan winters seen on TV....why you need the tools of a hunter / gatherer lifestyle. This guys got it going on eh?....and oh, he was staying at the Motel. 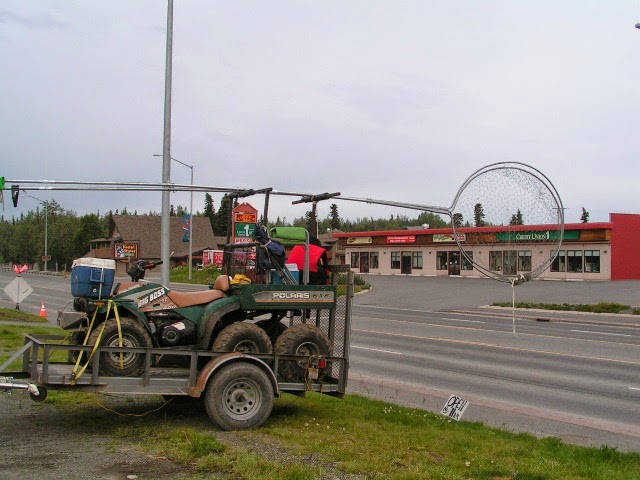 And in the ' I just love it all department ' here's a couple pics of things that jumped out at me. The other morning as I prepped the Minnow the full moon reflected off the water in the most wonderful way. It was 4:30 am and I was alone, I can't tell you what I was thinking but I can tell you this...it's spiritual, it drives right through me. 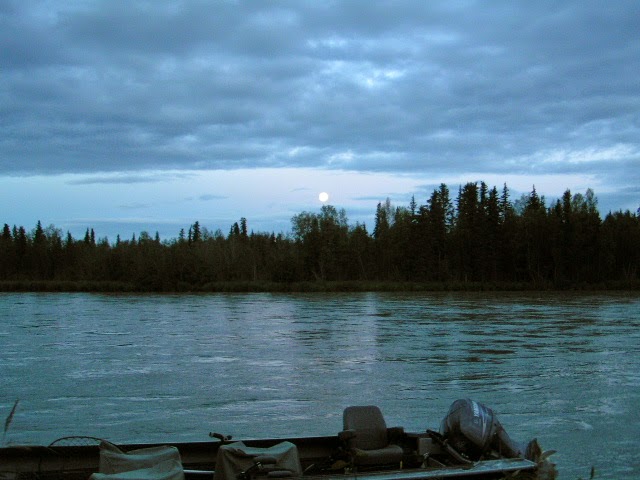 I've seen thousands of eagles. I've seen them hunt, learn to fly, mate, you name it if an eagle does it I've seen it. BUT, this blew my mind for two reasons. I've never seen one sitting on metal as I always thought they balanced by using their talons on wood. AND, if you look close you'll see he's holding a plastic water bottle with his talons...now that's weird....a greeny bald eagle into re cycling. 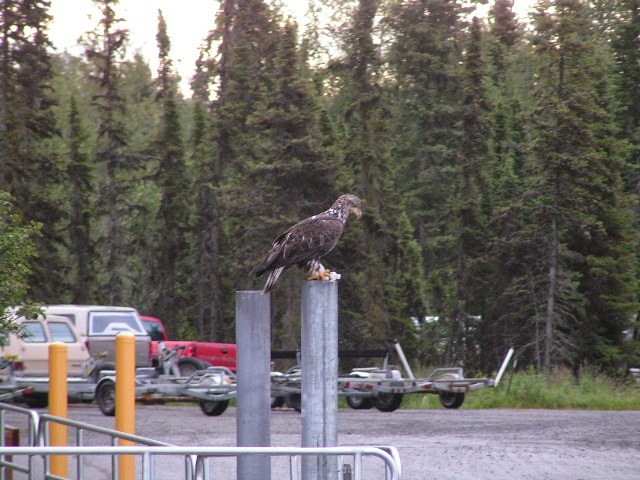 I can't let the blog go without at least a word about the Alaska Dept. of Fish and Game because I had a weird visit out there the other day. I too went out to get a dip net permit because even though I've never done that and likely won't I want to keep my options open in case I need to take advantage of it to help us through the long brutal Alaskan winters as seen on TV. So I got to noticing that the two Commercial Fishing advocacy groups both rent space in the same building as ADF+G.   KPFA is Set netters and UCIDA is the Drift fleet.....mmmmm.....Now these salmon are by our constitution a 'common property resource' , meaning they belong to all of us but these guys seem to get just a bit more of the property and we seem to get more of the common. 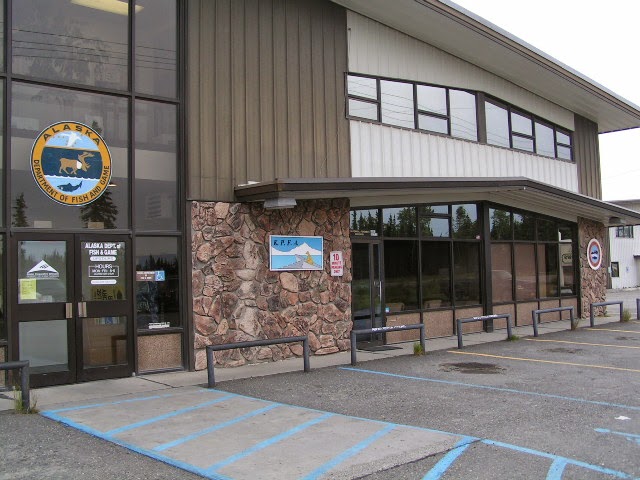 So the reason they rent there could be lots of things, cheap rent, great views, the Subway shop next door or maybe they're all just friends, who knows. But I'll tell you what happened while I was in the ADF+G office the other day...and I promise you this is 100% true, I mean a guy couldn't make this up....While I was filling out the paperwork a delivery man arrived with a huge floral bouquet and left it at the reception desk. I said to a gal I know who was holding it " how cool , your husband sent you flowers". She replied " no, it's for all three of us from a commercial fisherman we know, aren't they beautiful"?

Jeff King
Soldotna, Alaska, United States
I have been a fulltime guide on the Kenai River here in Alaska since 1981. I'm a fishing machine between my summer job and surf fishing in Mazatlan Mexico. I've been married to the best person I know for 32 years. I'm a musician , health nut and I like to have fun. Mile 14 is where I live on the Kenai River. So this Blog will be my views, experiences, huge catches and adventures right here from Mile 14...and most of them will be true. 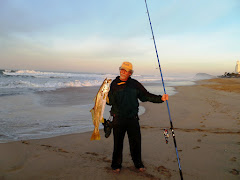 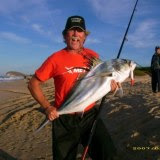 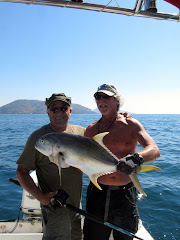 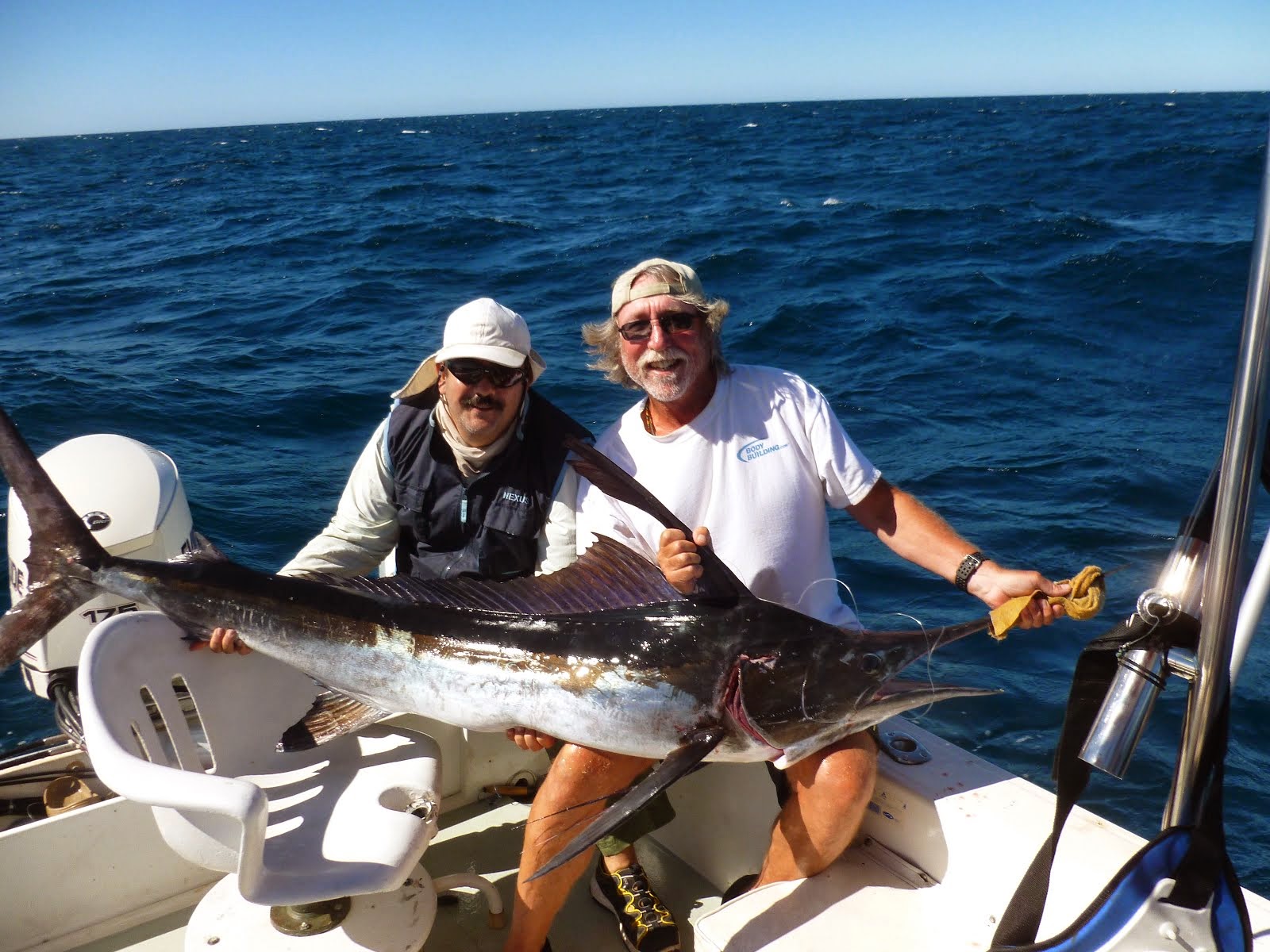 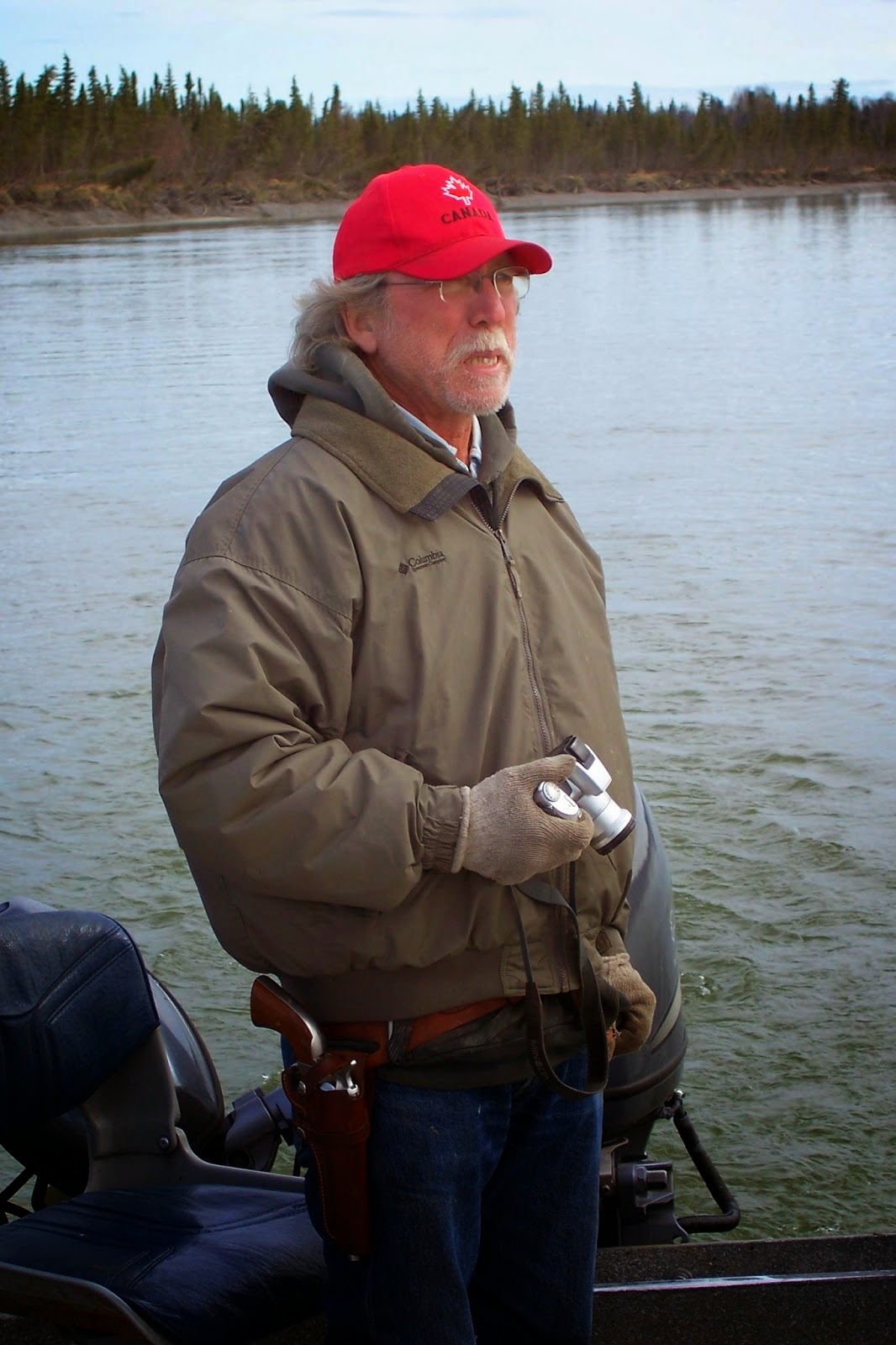 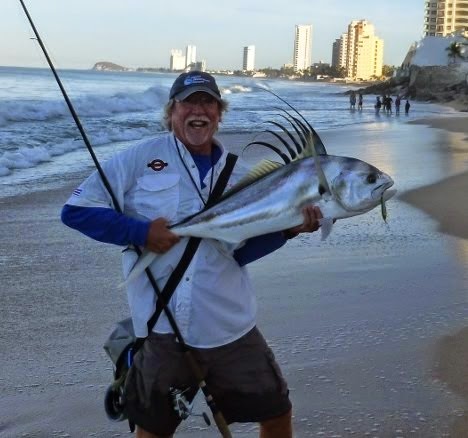 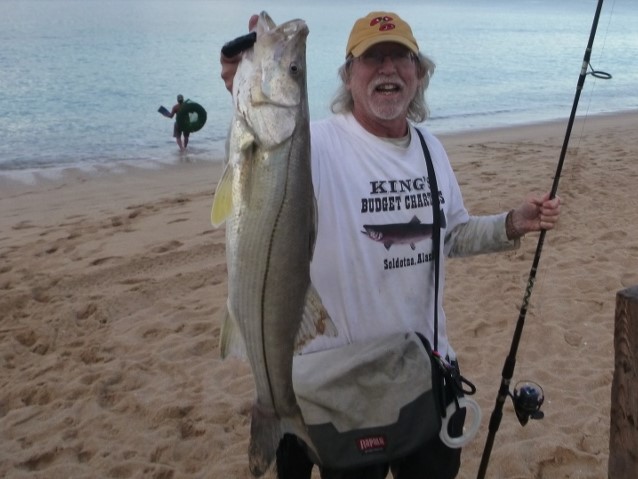